We are starting 2019 by hosting a community-based project to start the new year off with the best intentions and wishes for all!

Come in and make an origami crane to get to our goal of 1,000 before the Chinese New Year on Tuesday, February 5!

If you haven’t folded a crane before, there will be instructions for you at the table. We’ll also have practice sheets for you to learn with. 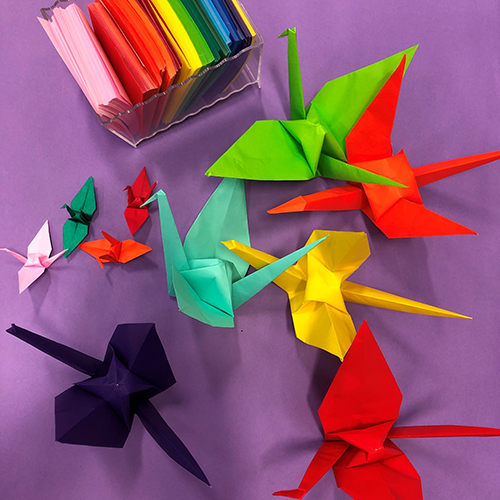 A very, very short story of origami and the crane...

Paper was invented in China (105 A.D.) and was considered a luxury item. Monks introduced paper to Japan in the 6th century.
Paper folding was first used only for ceremonial purposes.

The crane has been an elegant symbol of good fortune, long life, healing, knowledge, honor...

By folding 1,000 paper cranes it was believed that your wish would be granted.

"Origami," the Japanese name for folding paper, has developed into a high art form.

It is also known that the Moors brought this art to Spain by the 12th century. And, it became very popular in Germany and England as well.
Today, paper is being folded in to amazing forms using tremendous skill and patience.

BTW...
If you haven't watched "Between the the Folds" by PBS, you'll be amazed!
pbs.org/independentlens/between-the-folds/history.html

Meininger's carries origami paper by Yasutomo and Aitoh and kits for 1,000 cranes by Yasutomo